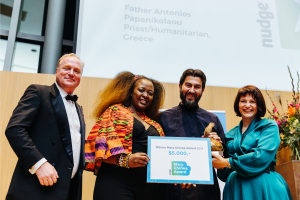 Amsterdam, 24 October 2019 – Father Antonios Papanikolaou received the very first Mary Chirwa Award for Courageous Leadership during the Nudge Global Impact Awards night on 22 October 2019 at the Peace Palace in The Hague, the internationally recognised institution for peace and justice. The Award was handed out by H.R.H. Prince Carlos de Bourbon de Parme, Head of the House of Bourbon-Parma, member of the Dutch Royal Family, Director of the Compazz Foundation.

Father Antonios is the founder of the organisation Ark of the World that supports children and teenagers who are homeless, orphans, runaways, school drop-outs, children of drug users, immigrants and refugees. His work is extremely important, as the Greek financial crisis has left a lot of people homeless. On top of that, Greece has been battling with the refugee crisis for a few years now, creating more strain on the Greek economy, but also polarising the society in terms of accepting immigrants and refugees.

Especially in the island of Chios, where Father Antonios harboured more than 200 children of refugees in his shelter, part of the Greek community on the island refused to accept hosting refugees. The Committee awarded his work not only because of his courageous leadership, but also because people being relocated against their will is a growing challenge that the world will have to learn how to deal with and Father Antonios is showing us the way.

Who is Mary Chirwa?
Mary Chirwa is the Director General of the Financial Intelligence Centre (FIC) in Zambia and is bravely fighting corruption in her country. In her yearly report, she discloses money trails that lead to criminal situations in Zambia. She was our guest of honour during the Nudge Global Impact Awards 2018, where she told the audience that, since publishing the reports, she has been receiving threats to her life. Chirwa however remains resolute in her passion to fight corruption in Zambia. “It’s dangerous to do this job, but I love it. If I get scared, I can’t help my community. It takes fearless leadership to be able to work in this environment.” she stated. Mary Chirwa’s principles, work ethics, and desire to create impact under adverse conditions show how an individual can make a huge difference.

What is the Award about?
The Mary Chirwa Award for Courageous Leadership is an award for leaders who have stood up for what is right in the face of a globally recognised challenge. In her name, we want to recognise individuals who have proven courageous leadership in fields related to the Sustainable Development Goals (SDGs), as well as exceptional courage in the face of adversity and was able to create great impact for their community, society, country, and/or the world at large.
The nomination process was open to the public. Our esteemed Nomination Committee see below) conducted the second round of selections, through which the Winner emerged.

The Nomination Committee
The nomination committee consists of George Papandreou (former Prime Minister of Greece), H.R.H. Prince Carlos de Bourbon de Parme (Head of the House of Bourbon-Parma, member of the Dutch Royal Family and Director of the Compazz Foundation), Jeff Furman (former Chair of the Board at Ben&Jerry’s), Frans Geraedts (Director at Governance and Integrity Nederland), and Mary Chirwa (Director General of the Financial Intelligence (FIC) Center in Zambia), in honour of whom the Award was created.

The Prize of the Award:

“How will a refugee or immigrant survive if you don’t teach them and help them find their way? They will certainly steal! I approached the children of immigrants and refugees, because I explained to them the story of our forefathers… We know what immigration, racism, and death all mean. If each one of us made a little bit of effort in their neighbourhoods, we wouldn’t have such a big problem with foreigners that cannot escape our country and inevitably become marginalised! So we lock ourselves in our homes, or we help them get back on their feet.” Father Antonios remarks.
“Father Antonios is proving to all of us on a daily basis the unlimited power of love, compassion, and empathy. His dedication and commitment to his work at the Ark are not just exemplary, but they remind us that, even under the biggest adversities, there will always be people that stand in the way of fear, and don’t let hope wither.” says Jan van Betten, Nudge Founder and Member of the Board of the Mary Chirwa Award Foundation.

About the Ark of the World
Father Antonios is the founder of the Ark of the World, a Non-Governmental non-profit Maternal and Child Special Care and Protection Organisation. It is primarily targeted at young unprotected children, most from single parent families, but also many without parents. Children that are experiencing difficult conditions, such as neglect, abandonment, lack of medical care, and with an uncertain future. The Ark of the World was founded in 1998 in the area of Kolonos, a really poor area in the centre of Athens, and today operates four shelters throughout Greece: Athens, Chios, Volos, and Epirus. More than 500 children of all ages and nationalities receive hospitality and care from the Ark.
“Our door will always be open to them.” Father Antonios states.