Blockchain expert and CEO of start-up Tykn will share his story at the Challenge this year! 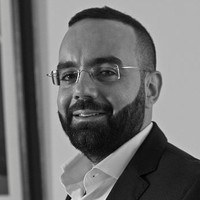 In 2012, Toufic ‘Tey’ El-Rjula discovered that he is, in fact, an ‘invisible man’. On his Dutch driver’s licence, you will not find that he was born in a city such as London, Berlin, or Amsterdam. Instead, he is declared as being ‘Unknown’. This is because Tey was born in Kuwait, during the gulf war, when the birth registries were destroyed en masse. As such, he does not have a birth certificate, and even if copies were to exist, neither he, nor the issuing authority could possibly verify it.

In 2014, he started his asylum application in a refugee camp in the Netherlands, where he was forced to move after his work permit of five years was terminated. Here, for two years, he felt the pain of thousands of Syrian refugees unable to verify the authenticity of their documents. On top of this, many of these refugees had lost other important documents such as land titles and academic certificates on the road of refuge. By the end of his stay, he had met more than 1000 ‘invisible’ men, women, and children.

A third of the refugees in Europe are children, and while they are lucky to get documented, hundreds of thousands in Syrian refugee camps do not have birth certificates, and newborns in camps are unable to complete the birth registration process, due to economic, geographical and complex administrative barriers. Ultimately, the experiences the refugees shared with Tey in the Dutch refugee camp regarding the hardships they suffered as ‘invisible people’ gave him the inspiration and motivation to found Tykn, together with social entrepreneur Khalid Maliki, in order to work on providing self-sovereign identity to all.

Tey: “Why blockchain? Because this type of technology is decentralised, resilient, borderless, transparent and neutral.”

At the Challenge, Tey will tell his personal story on blockchain for 20 minutes and will also be one of our 23 experts/facilitators to work with the participants on their impact plans in a ‘friendly consulting’ session. We’re thrilled that he’s joining us and may help to inspire other budding entrepreneurs!