At the Nudge Summit last year, the winners of the Nudge Global Impact Award 2017 were announced: Emily Kennedy (Youth in Agriculture Initiative, Uganda), Héctor García Montemayor (Heineken, Mexico) and Michiel de Koning (Heroes & Friends, the Netherlands) received this recognition because they were judged as having created the most impact with their projects in the months following the 2016 Challenge. As a prize, they won a trip to Kenya to do a MasterPeaceWalk alongside the Maasai (10 – 18 May 2018). Here, we share their experiences of the trip! 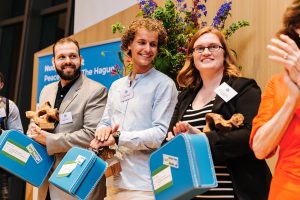 “Imagine being in one of the most beautiful places in the world, surrounded by 50+ unique and inspiring people. That was the MasterPeace Walk for me. I arrived with little expectation, other than knowing it would be physically demanding, and that I had a high probability of getting sunburnt! But I what I left with, I’m still not able to put into words. The people – both participants of the Walk and the Maasai – shared as much of themselves as they could, which left me feeling nothing short of grateful and inspired.

The biggest challenges were the physical demands, particularly in the face of a pretty big temperature difference (it was 2°C when I left Canada and was 35+°C while walking).

What I learned about the Maasai: while we were driving to the next camping spot, we were approached by a group of ladies, and a conversation ensued. As we drove away, I was told that one of the ladies was asking for a cow from the driver, as she was experiencing some financial difficulties. It was then that I was told one of the most incredible things that I learned about this amazing culture – in cases like these, if a cow was available, it would be given to the lady so that she could mend her struggles. No questions asked and nothing in return! I like to think that the part of Canada I am from is pretty giving of their time, energy, and resources, when possible, but I don’t think I would ever see it be the norm that something like this would take place.” 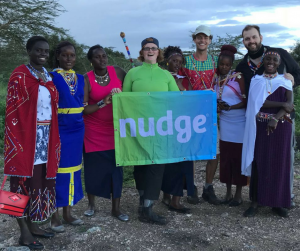 “My experience with the Maasai was quite special and unique. Few people will experience what we experienced so I’m very grateful for that. As for the journey and lessons learned there are a few:

During our first day on the road, our truck got stuck in the mud early in the morning. We had to get out and try to get the truck going again but it was really deep in the mud. After two hours of digging and preparing, we pushed the truck and the driver accelerated, out of the mud, into the next pool of mud. We were baffled that we moved only 5 meters and got stuck again. How could it possibly happen?

We did this over and over again and slowly we saw the spirit of the muzungus (white people/someone who wanders aimlessly) drop. However, after being stuck four times, digging for hours in a row a remarkable change thing happened. We received support from a passer-by who was going to a funeral, but cancelled the plans because he wanted to help us. He had a four wheel drive and tried to pull us out of the mud. However, even with 20 Maasai, the four wheel drive, and hours of digging we did not manage to get out. So we had to change plans. After a group discussion we decided to walk back and go to the first campsite with four other cars.

This taught me two lessons about the Maasai. Firstly, no matter how many setbacks you face, you have to keep on moving. If you’re stuck in the mud, it doesn’t help to stop moving and digging because you’ll just sink deeper and never get out. This largely reflects the complexities of developing their society with regards to women’s rights, education and economic development. There is no way someone can see how to make the progress they want and there will be dozens of setbacks, however, on our first day we already learned that they don’t give up. Approaching life with such patience and perseverance is something I have taken home with me and hope to show to my friends, family, colleagues and the world at large.

The second thing I learned is the fact that helping each other is a priority. Going out of your way, cancelling the plans you have to help some people who are stuck, that’s really admirable. If the community is more important than the individual, I believe our societies can also make tremendous progress to increased well-being and belonging. So I’ll simply lead by example and go out of my way to support others if needed and I trust that others will do the same because it is contagious.” 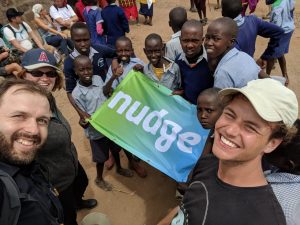 “It was really amazing. Overall, I learned about Kenyan culture and obviously the Maasai tribe. What was a bit difficult was walking in a hot climate without a clear overview of distances and times. I think that Western cultures can learn about the patience and spontaneity that the Maasai have. They are always open to new challenges.

Maasai tribes live in difficult conditions and are always subject to climate changes. Particularly this year, there has been good and constant rain in the region, so there is enough food for cattle. Independently of what happens in their environment, Maasai are always happy and willing to help any foreigner so they are really friendly. It is interesting how “modernity” is getting to them since they have to update and start studying different languages and subjects in college.
If I had to describe the trip in one sentence I would say: “An unexpected journey with extraordinary people”.”
Share this article: