Joe Llewellyn: the pro-socialness of people aligns with the environmental needs of the planet..

“The Challenge has pushed me out of my comfort zone… It’s extremely comforting to know that there are other people who are thinking and talking about sustainability, and actually doing things as well.”

Recently, Joe, one of our 2020 Challenge’ Wild Card participants, visited our office in Amsterdam to tell us about his impact project and to reflect on his time at the Nudge Global Impact Challenge. Here’s the conversation we have captured… 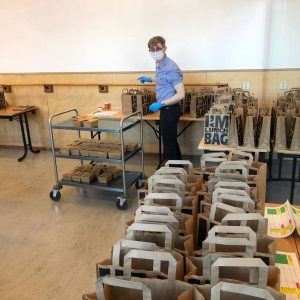 I am Joe Llewellyn. I am originally from Leeds in the UK, I have a background in Psychology with a Masters in Organisational Psychology. That was where I was initially introduced to sustainability related issues, like systems thinking. I ended up using literal ‘nudges’ for my dissertation, and that’s how I found you guys here. I’m really glad I did, and that I applied as a Wild Card participant. I’ve been in Amsterdam since September last year, and I’ve been working with TU Delft and Schiphol airport since December. At TU Delft I am doing coaching with bachelor students, giving them feedback on their work. At Schiphol I was working on an innovation project, primarily looking at autonomous vehicles and design, and how these autonomous vehicles may impact the airport’s ecosystem.

Initially, when I applied to the Challenge, I wanted to tackle food waste from an environmental perspective. I wanted to set up my own food service that would help tackle food insecurity, reduce greenhouse gas emissions, and employ people. I had originally wanted to do a service that was completely my own, but between my two different jobs, the lockdown, and curfew on top of that, I could only really do the work I was doing on the weekends: volunteering with Buurtbuik. 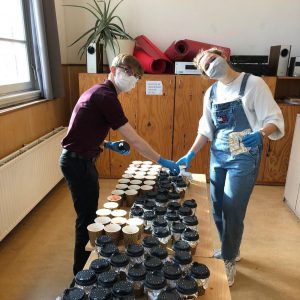 I have been involved with Buurtbuik since the end of November. At Buurtbuik, volunteers collect leftover food (that would otherwise be thrown away) from suppliers on Friday afternoons and Saturday mornings, and then on Saturdays we will cook, package, and distribute the food packages. They’ve been operating for a few years now in different cities in the Netherlands. When I contacted them to see if I could get involved, they told me they were thinking of opening up a new location in Amsterdam. I was there in the first week helping them get set up and I’ve been there every week since. We’ve slowly been starting to calculate our impact, and we estimate that soon we will have served 3,500 meals at our location! 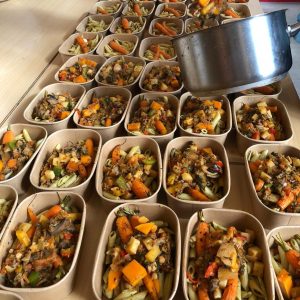 Originally I was trying to tackle food waste from an environmental angle, but then I quickly realised the social benefit of food. This was a great way to get involved in a community I wasn’t involved in, being new to the Netherlands. There are a lot of people who are experiencing food insecurity, even in Amsterdam. We consistently deliver to around 100 guests or so, half come pick up their food and half deliver their food. It got to a point in late December where we even had too much food for our guests. At this point I began to realise, I’m not just looking at food waste but I am part of this wider community, this wider ecosystem of people. This is when I thought, why don’t we reach out to De Regenboog groep? The Regenboog groep runs four or five homeless shelters in the city center of Amsterdam. At the end of my shifts I’m usually taking the rest of the food to them, and this is by far the highlight of my week. This has really helped us at Buurtbuik; because of our location and the amount of space we have, we have too much food to know what to do with.

What is the impact you want to make?

Food is such a ubiquitous topic which touches everyone, and it seems like an easy win, as all we have to do is value it better and redistribute it to people who need it. Initially, I wasn’t factoring in the social impact. I’m not sure how to quantify it, but I can see it on people’s faces when I’m delivering food or when they come to pick it up. They have tears in their eyes because they haven’t spoken to anyone in a week and they don’t always know where their next meal is going to come from.

It can be hard to get people to take food in the first place because they might feel embarrassed for receiving free food. I try to discuss with people that organisations such as Buurtbuik are there to support people throughout their ups and downs, they shouldn’t feel bad about needing help during a down period. I tried to also encourage people by pointing out the environmental impact of using leftover food, but I found that the environmental impact factor is not the most effective. The way to get people to take more food is through getting them to do it for themselves and their neighbors. They are not as compelled by the environmental impact of food waste, but if I ask them to take food packages for their neighbors as well, they would take double, which helps us massively. So the pro-socialness of people aligns with the environmental needs of the planet. That is a line of thought that I’d like to investigate further, I would love to build a PhD around that.

How has the Nudge Global Impact Challenge impacted you?

The Challenge has pushed me out of my comfort zone. After my Masters dissertation, I realised how easy it was to make an impact, but I needed another push. To have this organisation put forth this Challenge gave me some direction. I’d say the biggest impact came from my peer coach circle, because it was the most consistent throughout the programme. The fact that I’m in a coach circle with someone from Nova Scotia, as well as people who are in Kenya, London, Costa Rica and I’m having a direct influence from all of these people… It’s extremely comforting to know that there are other people who are thinking and talking about sustainability, and actually doing things as well. We’ve got a Whatsapp group and we send pictures to each other of what we’ve been up to.

Hearing from other participants about what they’re doing has kept me inspired throughout the past year. I also liked how personable people were throughout the Challenge. Rick and Yori as well, from Leaderscope, were also very personable throughout our sessions. One thing that stood out was Rick’s talk about the “Li’s” (when everyone else is saying “La”) and that encouraged me to speak up about sustainability and social responsibility in my work environment, when those topics were not being discussed.